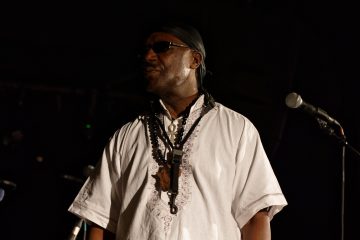 Gyedu-Blay Ambolley started in the sixties in the Uhuru Dance Band and learned music from outstanding artists like Ebo Taylor, with whom he founded The Apagya Show Band in 1974.

His 1973 hit “Simigwa-Do” includes the growled scattershot rhythmic spoken interludes over percussion – between conventional sung verses – which has made some people claim that he is in fact the originator of rap.

Now, after more than 40 years and 30 albums, Gyedu-Blay Ambolley is a living legend himself. He figures on numerous trendy re-issues by the likes of Soundway and Analog Africa. The latter released a 12” in 2018 containing four Afro-funk tracks by Gyedu-Blay Ambolley.

In 2019, he released his latest solo album, 11th Street, Sekondi (out on German label Agogo – his home since his international career was revived by a reissue of Simigwa), which is full of groovy, funky stuff.

If you like deep groovy Afro-funk and highlife, you shouldn’t miss Gyedu-Blay Ambolley and his Sekondi Band when they play Roskilde Festival 2020.